Sometimes when I’m watching a movie, even if it’s great, I wish there were some things I could change. For example I was watching that movie “The Witch” last night, and I’m pretty sure there are some visuals in that movie I could have gone without seeing, and still gotten the point…

But here are eight changes I would make to some slightly older sci-fi films.

1. The lightsaber battle between Luke Skywalker and Darth Vader.
It’s only probably the greatest scene in science fiction movie history. But this scene could have been slightly improved by a solid roundhouse kick to Darth Vader’s mask from Luke right as Vader was slicing his hand off. Instead I’ve always thought Luke came across a little weak here. I think Yoda would have gotten a roundhouse kick in.

2. That scene at the start of Terminator where he’s not wearing any pants…
They could have put some pants on him. They can send a robot back in time? But not pants? Whatever…

3. Jurassic Park kids.
This would have been a much better movie if they’d have let the dinos eat just one kid. Or step on one. Or something… I’m a sucker for realistic action scenes. And kids are slow.

4. Different back to the Future car.
They should have used a different car that isn’t pretty much impossible to buy and maintain. That way they could have after marketed a ton of bolt-on “time machine” accessories. Just think how cool a 1980 something Buick with no paint and all that technical do-dad stuff bolted to the roof might look in my driveway.

5. Wussy District 9  Aliens
I think the aliens from the movie “Aliens” should have shown up at some point and shown those weak ugly District 9 aliens what a real alien is supposed to act like.

6. Logan’s Run
This movie would have been way better if once they had escaped the city they’d have run into the apes from Planet of Apes. Or at least had a scene with Charlton Heston passing through. I mean seriously, are they not almost the same movies anyhow?

8. The Matrix Trilogy
I believe the Matrix is one of the most brilliant ideas in science fiction movie history. And for some reason I still can’t remember most of the movie. I think it’s because it’s so freaking long as three movies. I wish this had been just one three hour movie. Then I’d have time to watch it again. I feel the same way about the Hobbit, Lord of the Rings, and all of the Harry Potter movies.

I know I have many more. And these types of lists are normally top ten. But we’re going with eight because it just feels right. 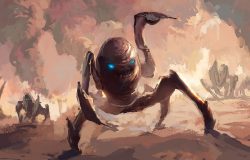 How To Be Creative (a post about the creative process)