The year is 3890 something and the people of Earth have learned that their days are numbered due to an asteroid on path to hit earth within a couple of months. However, a team of scientist have recently discovered a method for bending space that would allow the inhabitants of earth to efficiently move to another planet. There’s only one problem. The only other inhabitable planets are already inhabited. And the people of earth are not equipped for the battles that would be require to overtake those worlds. So a delegation of “negotiators” is sent to five different planets in order to negotiate the move of over twenty billion inhabitants of earth.

The idea of multiple dimensions and realities 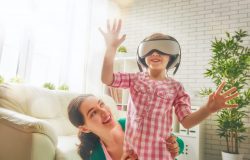 Pedro and His Virtual Wife

Can you give me ideas about sci fi essays?