This is a story I’ve been working on in a previous post. I took a break the last few days from updating it here and finished it offline. I’m not in edit mode and I’m going to post one part here every day as I work my way through the first real edit. This is part one!

Jacob stood waist-deep in the pond, spear in hand, waiting. Nothing moved below. After a while of standing still as a statue, he gave up and returned to the shore. Perhaps he’d try again tomorrow. It had been five days since he last saw a fish. His stomach clenched from hunger pangs, but for today a potato from the garden would have to suffice.

The air was quickly turning cold so Jacob built a fire in the pit overlooking the pond. There he sat watching the sunset, exhausted and filthy from the work of the day. The sun had disappeared beyond the horizon three-hundred times since Papa had disappeared into the water. It had only been around eighty times since Jacob’s brother Roger had left to find others. Papa and Roger took care of the fish and made sure they multiplied. Jacob tried his best to do the same but something had gone wrong. They no longer multiplied. He worried they might not last much longer.

As the light completely faded, the sky became clear with what had to be millions of stars. Papa was fascinated by the stars and often talked about what it might be like to travel to some of them. Jacob placed a potato in a small pot and placed it over the fire. He wished Papa was here now. As Jacob stared at the sky, thinking of his father, something peculiar happened. The sun started rising from the very spot it had just descended. Daylight filled the sky again; as if time had reversed. The sudden daylight was followed by the loudest boom Jacob had ever heard. A bright glow materialized in a moment right over the middle of the pond. From the glow, a large round object fell and plunged into the water. As it did, the sky went dark again.

Jacob launched to his feet, eyes held to the water. After first fully sinking, the top of the large sphere quickly re-emerged, the white top reflecting the light from the moon. The ball continued to bob slightly from the initial inertia of its impact. Then it slowly turned until what appeared to be a small black door rotated out of the water and swung open.

I should run, Jacob told himself. Instead, he remained still and watched as half of a man emerged from the top. For a second the man just looked around, as if taking in his surroundings, until he spotted Jacob.

“Hey, kid!” The man yelled, waving his arms. “Can you throw me a rope? Forgot to pack one!” 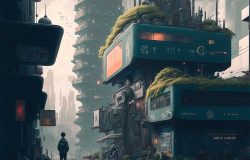 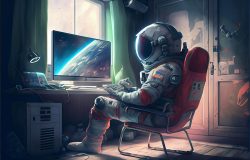 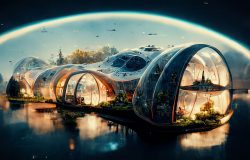 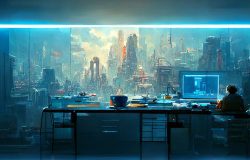