The year is 2750 and humans are three hundred years into having settled another planet in a sister solar system. It’s been years since they’ve contacted earth. But a convoy from that other faraway planet has just arrived. However, the human inhabitants of earth are nowhere to be found. It’s assumed that they may have perished from a comet that’s left a crater over half of what was the United States.

There is however an alien presence on earth. An invisible being appears to be following the convoy as they search for human life.

Little does the convoy know, but having realized earth was doomed by a comet, earth humans actually retreated to living in massive underwater dome civilizations. But the comet brought this other alien presence with it, which has forced humans to remain below the water.

Will the convoy find their earthly human counterparts before the alien presence does them in? 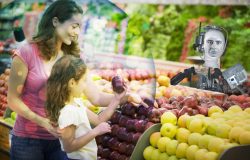