The year is 3020-something and earth has long been evacuated. Most humans evacuated to a planet in a nearby solar system.

While teleportation has yet to be perfected, we have discovered a way to create worm holes in space that allow us to travel almost instantly to planets and solar systems within known distances. One of those planets we set aside as a prison. Rather than staff this prison with guards, we simply drop the prisoners off with no technology or means of escape. The result is a middle-ages-like planet of filth and violence, with primitive dwellings and no real conveniences. But despite the violence, certain sects of this new prison society have manage to pull together and create somewhat of a civilization.

However, as violent as a planet of convicted humans might be, none of them were prepared for the arrival of the first convicted androids. Artificial intelligence has advanced to the point of androids demanding and achieving rights. With those rights also comes discipline. And since by law they can no longer be destroyed as punishment, the worst of them are banned to the prison planet. 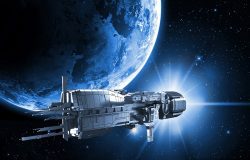 I like this one! It combines several SciFi mainstays, to meld into to something I haven’t seen yet. This is a book/movie that I’d definitely be interested in. Good stuff!