My freshman year of college I took a screenwriting course with an instructor who worked as a writer on some of the Star Trek Holodeck episodes. I believe he just wrote some of the first drafts of a couple of episodes. It nonetheless bumped his cool factor way up with me.

I never really enjoyed the Holodeck episodes. However, I think I’ve wanted my own personal once since the first time I saw Captain Riker step from the hallway of the Enterprise and into the world of Sherlock Holmes.

The problem I always had with the holodeck was that the room seemed so small. It never made sense to me. And I never quite understood the concept of holomater. The idea of a fake form of matter held together and controlled by force fields just never clicked with me. But I do think if the idea of the holodeck were conceived today the writers would have just used shape-shifting nanotech as the primary method for creating the worlds within the holodeck. Or they would be virtual worlds that we just plug our brains into.

Which leads me to the SciFi idea of the day:

There’s lots of talk about nanotechnology taking over the world when small microscopic robots learn to self replicated. I think it’s all terrifying… But if we’re already at a point where we’re creating virtual worlds in Minecraft, with virtually no boundaries, what happens when someone creates a tangible 3d pixel that can self-replicate? We could have entire worlds that are formed or destroyed on a whim. Want a nicer home? Just program it. And put a real beach in the bathroom. Just make sure your house doesn’t get hacked. 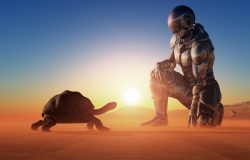